Spiral Dynamics is a psychological developmental model that was created by Dr Clare Graves, Don Beck and Chris Cowan. The model explains the evolution of human consciousness, both individually and collectively, through a series of stages and is based on decades of complex and thought-provoking research.

Clare Graves initially developed a theory of human evolution that deemed that the psychology of the human race moved throughout time base on an ever-increasingly set of complex life conditions.

After working with thousands of participants, Graves found that there are specific stages of development in human values. Graves decided upon eight levels of human value systems grouped by colour (also referred to as vMemes) and in each of these systems relates to world views, preferences and the perceived purpose of individuals at each particular stage. From these colours and value systems, Graves believes humankind structures their societies and how individuals integrate within them.

After Graves died in 1986, his theory was then further developed by Don Beck and Chris Cowan into the structured evolutionary model of adaptive intelligence that we know today as Spiral Dynamics. They published a book of the same title in 1996. 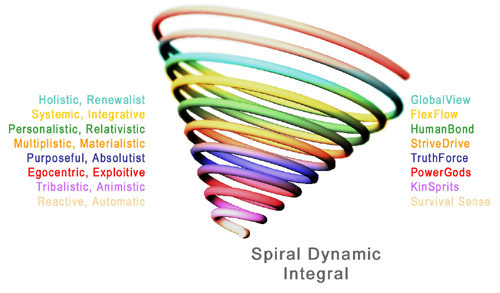 Each stage of the Spiral Dynamics model has an associated colour to identify it. Each individual stage of development doesn’t define a human being and instead refers to a ‘centre of gravity’ that works as the predominant value structure for a specific stage. Still, people can express elements of other value structures too depending on the situation.

Let’s take a look at the colours and what they each represent:

Beige is described as being the ‘survival’ stage when an individual is only concerned with things that will help them to survive. This includes food, water, shelter and procreation. At this stage, people do what is required to keep them alive and aren’t concerned with anything beyond.

This stage is about individual survival and doesn’t have the capacity for a collective focussed reality.

After beige comes purple; when individuals move from pure survival instinct towards creating tribes and harnessing strength in numbers – a more collective stage. This stage includes that which is ‘magical’ and involves making sacrifices to gods to gain favour and appease the spirits.

In this stage, humans do whatever they can to keep spirits happy. ‘If we keep our spirit guides happy, they will protect us from the enemy tribe’. Animal and human sacrifice may be commonplace for the good of the tribe.

Red is often referred to as the ‘warrior’ or ‘impulsive’ stage and is linked to characteristics like aggression, glory, rage and domination. This stage is egocentric, with individuals believing they can have whatever they want through power and dominance.

In this stage, purple tribes still exist but will be represented by a red leader or warrior who makes decisions, gives orders and dominates with power. This stage is very much controlled by one individual or a small group of individuals.

The colour blue refers to the stage where authority, rules, procedures, morals and hierarchy are all established and followed to protect the society and allow it to grow and flourish. It can be thought of as a rebellion against dictatorship. In comparison to the red stage, this could be considered much more peaceful.

Here, humans are willing to follow the rules, and most religions are rooted would be considered blue. This stage is a collective stage where the thoughts of the whole are taken into account.

Notice, after the aggression and power fighting of red, stage blue brings a hierarchical structure, such as religion, bringing peace. As with monotheistic religion, morality plays a big part in this development.

Orange is where human beings use reason to question hierarchy and learn more about the world around them. It is often referred to as the ‘achievement’ stage and describes when humans work hard to better themselves and be more successful. Hence, the growth of the personal development industry over the last 100 years. At this stage, individuals learn to excel, set and achieve goals, measure success, compete and play to win. Ayn Rand, a big influence in my life, is an excellent example of intense orange.

At this stage, businesses, science, medicine and most of the tenets of the modern world were created. The orange step was the driver of the industrial age and continues today as an evolving technological and information age.

This stage is highly individualised.

Green is a collective stage and one where people are concerned with equal opportunities. ‘Greens’ value everyone’s viewpoint and opinion and believe in equality at all costs.

It can be referred to as the ‘sensitive’ stage. People at this level appreciate diverse views, know the importance of meeting the needs of all and are concerned with human rights, animal rights, liberalism and activism.

The social justice warrior, regardless of how frustrating, maybe at this stage. Their lack of integration of the ‘lower’ memes is what makes them so out of touch. 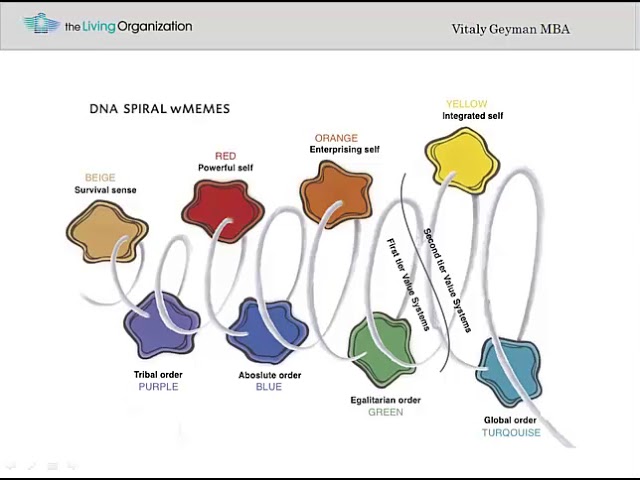 Beyond the first tier colour stages lies the second tier of colours. These are thought to be a level beyond the first tier, and it’s considered that the vast majority of society simply isn’t there yet. It’s described perfectly in the following analogy:

“Imagine an ant walking across a wooden floor with sections of colour corresponding to the Spiral Dynamics colours. When the ant finally reaches the edge of the floor (green), it seems there is nowhere else to go – until the ant realises there’s a wall there…and they can climb up, not just forward. Another dimension, if you will. They begin to walk up the wall – that’s yellow. They are alone; all the other ants are still on the floor, whether walking or standing still. The ants on the floor don’t look up at the wall, they don’t know it exists. As the ant walks up the wall higher and higher, they realise they’re not actually on a wall: they’re on a pole. And they can walk around the pole, to see different lines of ants approaching the pole from several directions. They are becoming turquoise”– Jamie Bonsall [source]

The first level within the second tier of Spiral Dynamics is yellow or ‘inter-dependence’. The basic tenets of the yellow stage are about pursuing learning simply to be able to learn more and become a more well-rounded and conscious human being.

The centre of gravity for this stage is living fully, consciously and responsibly and learning to be the very best person you can possibly be. This is another swing back towards individualist thinking, although much more holistic than anything in tier 1.

Turquoise moves beyond the individualistic yellow back to collectivist thinking. The characteristics of this stage are based around the acknowledgement of Self as part of a holistic, interconnected ecological system.

This stage sees individuals looking for peace in a turbulent world by developing more profound receptiveness of multi-dimensional perspectives. Turquoise experiences the wholeness of existence ultimately through mind, body and spirit.

The individual and collective being merged as one.

Spiral Dynamics – Beyond the Second Tier

Beyond Turquoise, there is a ninth level. The Dynamics Spiral is expansive and continual. It’s a never-ending upward quest for humans to be able to adapt to their situations by creating greater complexities of thinking.

Coral is the next level beyond Turquoise. Many believe that Coral will come alongside the developments of AI; Artificial Intelligence and Quantum computing being merged. It is thought that Coral would be a return to more of an egocentric stage (such as that of red) and will set the stage for the next future vMeme (Teal).

New Memes will be created and moved into as and when the evolution of human consciousness requires it. Ken Wilber stated that beyond Coral will be the third tier of consciousness and believes that beings such as Jesus and Buddha have previously evolved to the third tier.

The Importance of Transcending Each Stage

Whilst the Spiral Dynamics model shows each stage separately, this isn’t quite the reality. This is why it’s shown as a spiral – a continuous moving non-linear process. A person moves fluidly from one stage to the next, and it isn’t rigid. Integration of the stages previous is what allows a healthy and holistic psycho-spiritual progression in individuals, organisations and societies.

Each upward turn on the spiral represents a level of increasing complexity. Providing an entity transcends and includes the vMemes prior to their current level, they will have the capability of holding more complex and holistic models of Actuality. 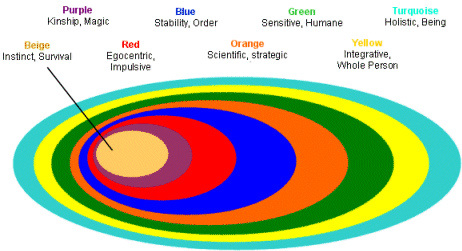 Spiral Dynamics – Using The Model in Your Life

There are many ways in which people can use the Spiral Dynamics model for their own self-development. The model is not intended to suggest that any stage is in any way better or worse than another, simply that they are different and that each stage has its own function in specific environments.

Asking the question of whether you recognise certain behaviours from the Spiral Dynamics model in the people around you in your personal or professional environment can help you in all areas of your life. Being aware of the model and the value systems within it is crucial for interpreting the behaviours of those around you.

Furthermore, it can help understand what drives and influences people’s thoughts, behaviours, attitudes and opinions. If you are a coach, for example, you can master the Spiral Dynamics model and become what is known as a ‘Spiral Wizard’. Meaning you can assist people and organisations ascend the spiral and create more holistic entities.

In a business context, the Spiral Dynamics model can be used to help understand the development that leaders and managers require to create, build and foster environments in which their employees can flourish. This helps build understanding as to what is necessary to create business environments that help sustain high levels of productivity, success and help to move towards a meaningful purpose.

The model can be used to help find new and innovative ways to manage and motivate people based on who they have become and what stage they are currently operating from.

To best use the model in life, it’s important to remember that nobody operates from just one level and that each development phase or stage is useful in a particular context or environment. As each colour is reached, an individual transcends but includes all of the stages before it. Imagine a set of Russian dolls as an analogy.

For those who are willing to learn about Spiral Dynamics and how it can be used in their life, it presents a compelling path. People can strive for healthy manifestations of the stage they’re in and any future stages they move through. This will open a person up to more nuanced thinking and more intellectual and emotional intelligence.

If that’s not a good enough reason to tune into the model, I don’t know what is.