Dr David Hawkins designed a logarithmic scale of consciousness, creating a linear model for a non-linear reality. Having spent a large portion of his life studying consciousness.

Hawkins discusses what he calls attractor fields, which are magnetic resonances of consciousness which draw energy towards us. When we vibrate at a level of love and joy, we attract people, events and circumstances that are in harmony with that state of being.

Coming from a state of fear, anger or grief often results in further events and situations that will reinforce that state. From this perspective our game in life can become one of raising our consciousness to draw health, happiness and success to us, rather than dwelling in a state of discontentment trying to manipulate the outer world to try to make us happy. 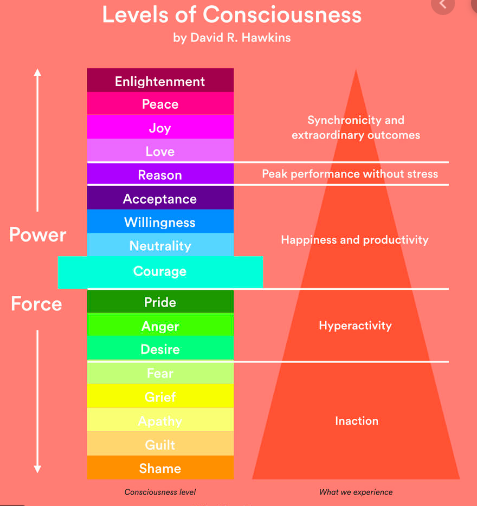 What Dr Hawkins found was that applied kinesiology could be used to determine the vibration and power of anything and therefore its level of consciousness. This realisation of consciousness kinesiology is an incredible development in Human existence.

Applied Kinesiology is still considered ‘pseudoscience’ within the materialist scientific paradigm. And generally speaking, beliefs create an individuals limiting realities. So until this is allowed further ‘mainstream’ scientific study, it will remain a perceived ‘pseudoscience’.

Check my review of Hawkins Power vs Force

See the video below for a good example of collaborating consciousness using kinesiology.

Consciousness Kinesiology – How to Self Muscle Test