The Seven Transformations of Leadership

It is commonly believed that an individuals personality type defines their style of leadership. Instead, leading psychologists David Rooke and William R. Tolbert believe that a person’s leadership style is influenced by something known as their ‘internal action logic’.

When reading about the different types of leaders defined by each action logic, you’ll probably be able to identify leaders who you have worked for or alongside.

It is far more challenging to identify and define your action logic. As with anything, it isn’t easy to be objective about yourself. However, it’s crucial to understand what type of leader you are and what kind of leader you would like to be.

What are Action Logics?

Internal action logics characterise a person’s mindset and the associated skills and ability to lead a team of people successfully. They define how a person interprets their surroundings, the people around them and how they react when they perceive their safety or power to be under threat.

Further, an internal action logic is something that can be changed and influenced, so leaders who wish to transform their capabilities can do so. The model itself is a framework for leadership wisdom.

As leaders grow, develop and gain more knowledge and skills, they tend to move from ‘lower’ action logic stages to higher ones. Each of the action logics has defining characteristics and both positive and negative attributes. It is generally accepted, however, that moving from one stage to the next is a positive step forward. For example, an individual may go from being an opportunist leader to being a diplomat – a more respected and effective leader – by ascending from one action logic to the next.

The Opportunist Leader is egocentric, untrustworthy and often displays manipulative behaviour. These types of leaders are driven solely by personal gains, and what they can get from any situation is driven by what they can get to satisfy their needs. They are also known for placing blame with others, even when this is not deserved, to make themselves look better.

Opportunistic leaders are incredibly challenging to work for as they see other people as competition and often exploit situations to suit their agenda. Generally, they do not survive long in leadership positions as they can make working life very difficult and unpleasant for others. Of course, when you operate from selfishness as modus operandi, your leadership skills will stutter.

The Diplomatic Leader is one who seeks to please the people around them, especially those who are in more senior positions than they are. They will try to avoid conflict at all costs, which can be problematic if they are in a senior leadership position where inevitable conflict occurs.

Diplomats are mostly polite, sometimes overly so, and friendly, and this means that they struggle to give honest, constructive feedback as they don’t want to hurt anyone’s feelings or cause any potential situation of tension or conflict. Whilst Diplomats are afraid of conflict; generally, they can perform daily tasks required successfully.

The Expert Leader continually seeks out more knowledge both at work and outside of work, to be an expert. They will also be a person who seeks to control the environment around them with their knowledge. They try to continuously improve, be as efficient as possible and use data and logic to back up their decision making.

This type of individual can be challenging to work for as they are generally ‘always right’ and are not fans of collaboration. They believe their way of doing anything is the best, so what’s the need to include anybody else?

The Achiever Leader challenges their employees and offers support to their team whenever needed. They tend to be able to create a positive and productive work environment successfully and are better able to work with others than the Expert, the Opportunist and the Diplomat.

Achievers receive feedback well, see the benefit of being able to influence those around them positively and can resolve conflicts by being open and compassionate. They are also able to delegate effectively, plan for both short and long term goals and generally have far higher staff retention levels than other leadership styles.

The Individualist Leader recognises that none of the existing action logics are natural. At this stage, due to the realisation that the world is subjectively experienced, leaders can add unique value to an organisation. They can communicate well and relate to other points of view.

On the flip side, Individualists are prone to not following rules if they regard them as useless or irrelevant. This can lead to frustration, tension and conflict.

For example, it can create incompetent work projects. If the individualist leader thinks there may be a better way to do something, following external instruction can be an issue. Hence, they can be ineffective team players and don’t share an organisation’s overall vision and mission.

The Strategist Leader is an individual who will focus on the second-order organisational impact of people’s actions and agreements. Because of this, these types of leaders can create shared visions across different action logics that can work towards organisational transformations.

Within a Strategist leader’s action logic, they cope better with conflict than those who exist within other action logics. They are better at dealing with other people’s instinctive and emotional reactions, making them resilient and able to drive change.

They continuously seek out an idealistic vision with practical and realistic ideas and actions.

The Alchemist Leaders actions come from the action logic where they can easily and frequently reinvent themselves within their organisation depending on the situation and circumstances.

These individuals can talk with anyone of any status and can work on both long term and short term goals simultaneously with ease.

Alchemist leaders are rare to find in business (and in broader life). They are usually charismatic, personable, likeable and highly aware. 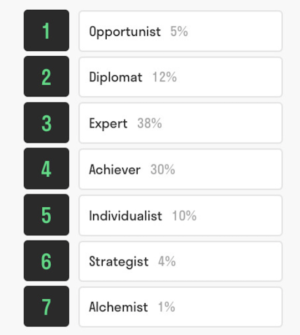 Leaders can transform from one action logic to another and can change several times between several different action logics. Things that can support leadership transformation in this way can be personal or organisational.

One of the significant signs that an individual is ready to move from one action logic to another is that they are drawn to the skills and qualities in people that define another, more compelling, action logic.

Another major event that can help leaders work towards transforming from one action logic to another is gaining a promotion or a new job that allows the opportunity for further learning and expansion of a person’s capabilities.

Changes in processes and organisational change are other factors that drive individuals to move from one action logic to another. Personal growth can occur as a ‘trickle-down’ from more senior leaders who are exploring more complex work patterns.

No matter what type of leader a person is, transforming to a different or higher level takes hard work on an internal level. Human nature is fluid. Those who are willing to dedicate time and effort to developing themselves as leaders will reap the rewards for their actions, particularly using models such as this as a framework.

The time has come for organisations to take this work seriously. With the advancement of technology and speed of change, those who make the effort will be the most impactful. Transcending the action logic stages has never been so important.

In reality, very few people are Alchemist Leaders. As Humanity gets more conscious and complex, they will be needed to drive us forward. With the skillset, attitude and models such as this, leaders can propel themselves to the forefront of leadership.